A Day in the Life of an Airline/Military Pilot

A Day in the Life of an Airline/Military Pilot

I have been flying for my airline for nearly seven years and am also the battalion Aviation Mission Survival Officer for a National Guard Air Assault Battalion. This requires a lot of balance between the two schedules.

My typical day starts the night before any given trip. I look at my schedule to note where I'm going and do a quick recon of the weather. This helps me pack appropriately for the overnights. I've been caught one too many times in a snowstorm with flip-flops and board shorts—thank goodness for meal delivery apps!

I usually like to bid for four-day trips. As a mid-level captain in my base, my trips generally start between 6 and 7 a.m. We are required to report 45 minutes before departure; I prefer showing up to the employee parking lot about 75 minutes before departure, which allows time for any delays going through security, a stop by the crew room to check-in, and perhaps a cup of coffee, if the line isn’t too long.

My airline is expanding at a rapid rate, and I don’t recognize many of the flight attendants who congregate in the crew room. They are required to come together for a quick brief for themselves. If timed right, I can catch the crew for my upcoming flight to make small talk before heading to the gate to officially begin our trip.

Once at the gate, I introduce myself to the gate agent working my flight. I ask if there are any issues or pertinent information for the flight, and they let me down the jetbridge to the aircraft. Once onboard, this is typically where the entire crew is introduced the first time. Often the flight attendants are from another base and have flown a leg already. As pilots, we don't typically fly with the same flight attendants for the entire duration of the four-day pairing, or even the day, if we have multiple legs.

Also for today’s flight, I’m doing a line check on a captain. We are required to observe captains on a normal line flight once a year in addition to other check rides. Training pairings are set up just a little different than a “normal” pairing. If I am conducting a line check, I’ll observe the captain while they brief the crew. I'm a fly on the wall, for the most part.

A major part of the airline industry is efficiency; the aircraft doesn’t make money while at the gate. It is not until it starts to move that the company makes money. For this reason, and additionally the large capacity of seats we have onboard (182 for an A320), there is a finely tuned orchestra of activity: cleaners, fuelers, caterers, etc.

It is imperative to conduct a thorough preflight, not only of the aircraft but the paperwork and maintenance logbook as well. If a maintenance irregularity arises, it can often be taken care of while the passengers are boarding to prevent unnecessary delays. The captain has the final authority on the safety of the flight. Our all-Airbus fleet is young, and there aren’t many maintenance items to be taken care of. The passengers are boarded, and the final paperwork is in order. Today we close the door and push back on time.

Chicago O'Hare is very intimidating the first several times you fly in, as it is one of the busiest airports in the world—both in terms of passenger counts and airplane operations. The radio is constantly busy as aircraft are arriving at the same time as others are departing.

Initially, we need to permission to push back into the ally with a ramp controller. They are charged with the coordination of aircraft and equipment within the gate area. In the wintertime, this is where we deice, and delays can perpetuate due to longer times in the ramp area. Thankfully, today is a beautiful, sunny spring morning, and we can push. After the ground crew permits us to start the engines and pushes us to the appropriate point in the ally, we can switch to “metering”—a frequency that does exactly that. O'Hare is so busy that they want to sequence aircraft along the taxiways as efficiently as possible. It is through metering we can then get a number in line, to begin taxiing. Depending on the volume of traffic at the airport, we can elect to taxi out on a single engine, which helps to save fuel. Metering has us switch over to Ground Control. Unlike many airports around the world, we don't contact Ground Control, they contact us. Many, many times they give us an abbreviated taxi clearance such as “Airline 123, follow the Airline 737 left to right to Runway 22L.” So, we do just that.

At this point, O’Hare is no different than any other airport. We taxi out to the runway, get in line for takeoff, and slip the surly bonds of earth. I have been flying for 23 years, and I still get excited every time we take off. If I didn’t, balancing my work/life schedule would be much more difficult. Sitting in the jumpseat observing the crew conduct a normal flight provides me a second to admire the skyline of Chicago. It never ceases to amaze me. As we level off at our cruising altitude, we continue to fly the aircraft and monitor the flight path and aircraft systems.

I have flown with the first officer before and know that he has a classic aircraft. While I don’t know the captain, we begin to make small talk around general aviation flying. Remember that we don't always know each other before arriving for the first flight. This is often a good opportunity to find common ground on shared hobbies or to learn new things. I once had a first officer who raised worms to sell to fishermen. I thought that was pretty cool, since it was a unique small business that he ran on the side.

Our arrival into Myrtle Beach, S.C., was uneventful, and I signed off the captain with another successful line check. My pairing isn’t built with as much efficiency in mind. I have roughly four hours of until I deadhead on the next flight, and I use the time to catch up on other matters.

As a military aviator in the Army National Guard, I have the same flight time requirements as my active-duty brethren. As a battalion staff officer, I am required to fly 30 hours every six months. This is further broken down to various hours utilizing night vision goggles, instrument flying, and a simulator. The adage “one weekend a month, two weeks a year” doesn’t come close to the time needed to fulfill these requirements or the associated responsibilities as a staff officer. Our unit has an inspection coming up in the summer months, which requires me to ensure that we have a presentable product for the inspectors upon their arrival.

I initially enlisted in the U.S. Marine Corps 17 years ago. After serving five years on active duty, I transferred to the Army National Guard to fly the UH60 Blackhawk. I plan to complete 20 years of service to take advantage of the military health and retirement benefits. To do this, I must balance a civilian career and the requirements of my military career—all in addition to home life with my family. One of the great things about airline life is all the time off . . . so they say! Every month when I get my airline's schedule, I'm happy to see I get the days off I bid for. It’s then quickly filled with guard flying to stay current and proficient in the helicopter. This translates to about four to five true “off” days scattered throughout the month.

One thing that helps keep the family life balanced is bringing my wife on trips with me. She has spent the night and day with me in New York City. My schedule allowed for an early morning arrival into La Guardia only to depart early the next day back to Chicago and be done for the trip. Our crew hotel is in uptown Manhattan. We wandered around for a few hours and by sheer luck ran into my battalion commander and his wife. He is also an airline pilot, and he made a mini-vacation with his wife doing the same thing. We met at a diner for lunch, then parted ways. That evening, my wife and I went to a comedy club and had ice cream in Central Park. While we paid for our own entertainment, my employer had paid for the travel and hotel and even gave me per diem during my time away. I’d be hard-pressed to find a better job with these benefits.

The Department of Labor enforces an act that protects U.S. military members serving in the Guard or Reserve. In a nutshell, it requires employers to let employees serve required commitments. The guard serves the community where they are stationed, and my unit is responsible for wildfire response, search and rescue of lost individuals, and support of law enforcement during domestic disturbances. Additionally, the National Guard was called upon to provide a multitude of support throughout the coronavirus pandemic. Many of my cohorts run satellite collection and testing locations, supplementing local health-care centers. They staffed polling stations during the election year as typical poll workers were unable.

We hope you enjoyed this insight into what a typical day in the life of an Airline/Military pilot can be. If you have any questions, please contact ALPA’s Education Committee.

Read a Day in the Life of a Cargo Pilot

Bring a Pilot to Your School 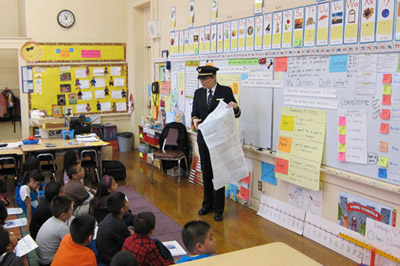 Want to hear about life as an airline pilot, how pilots navigate and operate aircraft, flight deck basics, and more?